The Biological Odor Control Polishing System is specifically designed to tackle tough organic odor loads from biological odor control systems such as bioscrubbers, biotowers, biotrickling filters, biofiltration systems, etc.  This system augments or replaces traditional carbon adsorption systems.  To control fugitive odors, the single nozzle is placed counter-current to stack exhaust or into the empty carbon vessel, which would be re-purposed into a mist chamber.  The 1/2 HP System features a Fogmaster Sentinel™ single HDPE nozzle with 1/2 HP regenerative blower and control panel (as outlined below) with 1-55 gallon drum of OCP&E® Brand Scrubber Formula.  This system is designed to run continuously or in cycles.

The Sentinel 5855 systems uses one or more Sentinel nozzles attached to a low pressure air manifold to atomize a liquid into small droplets. Nozzles can be pipe-mounted or hose-mounted.

The Sentinel nozzle creates a highly turbulent zone, dices liquid into droplets, and ejects it as a fast moving fog plume. Droplet size is adjustable, from less than 5 microns VMD to more than 40 microns.

This method ["cold fogging"] does not require high pressures, small orifices or hot surfaces for atomizing liquid. It works with both water- and oil-based liquids, and can atomize light suspensions (finely divided solids dispersed in a liquid carrier). And since the Sentinel nozzle has no small orifices, plugging is not a problem.

Nozzles are available in several materials. The standard nozzle uses Celcon® acetyl copolymer for internal elements; for fogging strong oxidizers, such as hydrogen peroxide and glutaraldehyde, HPDE elements are preferred; and for work in high temperature environments or involving erosive materials, nozzles are available in 316 stainless steel.

Applications of the Sentinel 5855 system include:

Cart Mounting / Portable Applications  For applications requiring portability, the 5855 can be mounted on a 2-wheeled cart. This carries controller, pump, blower (max size: 1.5 Hp), and one or two nozzles (pipe or hose mounted).

Liquid Supply  The Sentinel 5855 can use a pump to supply fogging liquid from a pail, drum or tote. It can also draw from a solenoid valve to an elevated tank or water line. The carrier liquid can be premixed to the final dilution, or mixed in-line by a 5250 proportional injector.

The control module includes relay contacts to open the valve or activate a supply pump. Although any type of pump can be used, peristaltic pumps are often preferred. They are self-priming, available in the low GPM ratings used in fogging, and often have variable output drives.

Scrubber Formula is a unique, multi-purpose odor neutralizer specifically designed to replace or augment traditional wet scrubber and mist chamber chemicals or scrubbants such as bleach, chlorine dioxide, chlorine gas, and caustic soda.  For tough organic odor loads, Scrubber Formula replaces acid(s) as the sole scrubbant.  In the biological odor control application, Scrubber Formula polishes organic odors and replaces carbon adsorption systems and can be added to nutrient feed system or fogged counter-current to stack exhaust.  For air pollution equipment maintenance, Scrubber Formula cleans packing media and internals, and the chemical can be added while systems are operating to avoid unnecessary down-times.  Imparts a pleasant, natural clean scent at stack exhaust.  Scrubber Formula can also be misted, atomized, fogged, or employed as an additive, and because of its versatility, Scrubber Formula is the chemical of choice for facilities opting to streamline their chemical inventories.

Ordenone® is an odorless inclusion clathrate compound which acts as a chemical lattice to entrap sulfides, amines, mercaptans, ammonia, indole and skatole compounds, and certain aldehydes.  The following chart illustrates an independent laboratory test of ammonia removal at 77.5% achieved with 3% Ordenone® in water.  OCP&E® Scrubber Formula contains a higher level of Ordenone® than 3%. 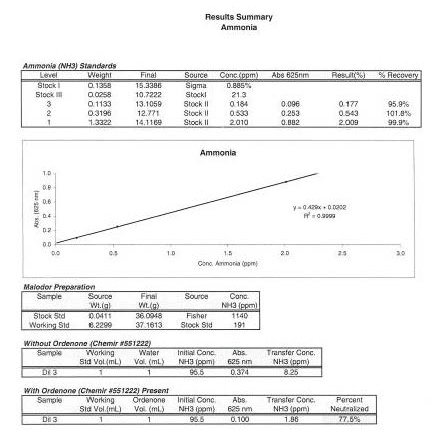 Biological Odor Control: The Bacillus spore blend targets a wide range of malodorous organic compounds including ammonia, hydrogen sulfide, volatile fatty acids, and mercaptans.  The biological component also degrades proteins, starches, cellulose, fats, oils, and greases.  The application specific bacteria produce extracellular enzymes that degrade organic matter, such as proteins.  The degradation by-products are metabolized by the bacteria cells and utilized for growth.  Thus, the slow break-down of these materials, which would otherwise result in the formation of numerous malodorous compounds, can not occur, and the odors are prevented at point source. 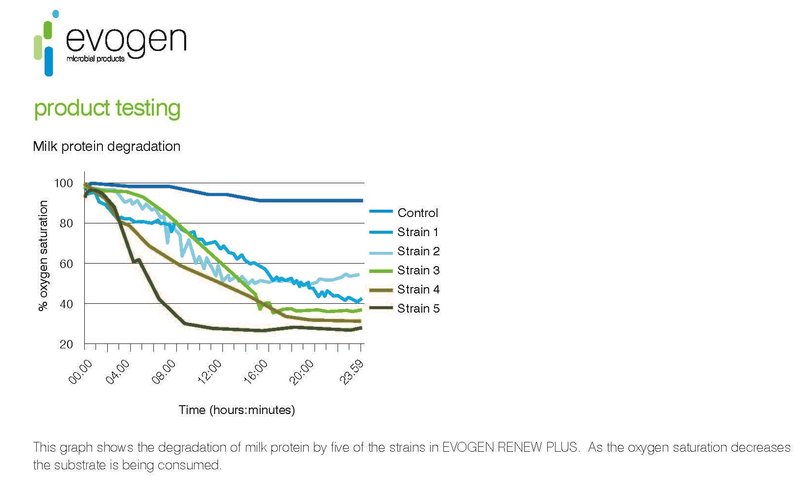 Available in Citrus Mint or Lemon.

New for 2016-2017: There is a new version of Scrubber Formula, Bio-Boost, which contains a cellular bio-activation liquid additive plus plant steroids.  The new formula contains all of the key ingredients of the standard formula plus two new components described herein:

Bio-Catalysts: The non-active, vegetable based bio-stimulant contains a proprietary, patented (US Patent 20110139713), blend of natural marine algal extracts, plant derived surfactants, a blend of vitamins, and anti-corrosion/anti-foaming agents.  The bio-catalyst reduces hydrogen sulfide production by increasing the metabolic activity of aerobic micro-organisms in the wastewater, thereby raising the ORP levels.  The bio-catalyst stimulates the aerobic micro-organisms to levels at which they reduce the organic electron donor molecules available to the anaerobic sulfide, reducing micro-organisms for their sustained metabolism.  This mechanism, along with the reduction in the anoxic laminar layer that exists at the interface of the pipe and the water stream, further reduces the viability of the H2S producing bacteria in wastewater collection systems and pipeline treatments.

For Plant Steroids, Expect Results in Five to Ten Days:
Listed below are specific test results and research pertaining to saponin which may be obtained by contacting us.

Ordering is now available by selecting the Bio-Boost Option from the drop-drown menu.